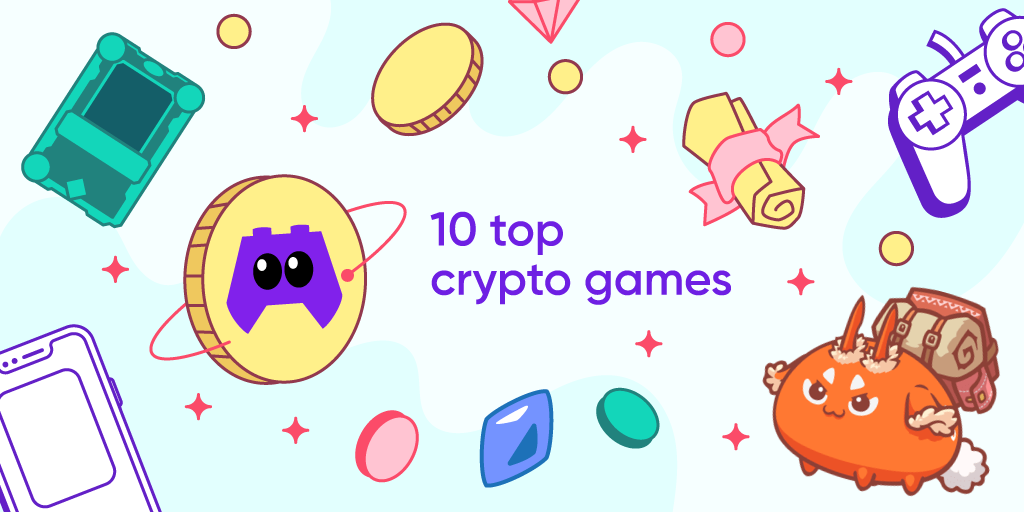 As crypto and blockchain have gained traction over the last two years, one of the major use cases to be established has been gaming. While crypto offers lots of advantages to gamers and the industry, it’s the use of new economic models that has really enabled blockchain gaming to take off. The play-to-earn movement enables gamers to generate cash from their favourite titles, collecting rewards in the form of NFTs used to represent characters and objects, and in native in-game currency tokens. The best players can make significant income just by spending time and progressing through these games.

The growth of the play-to-earn sector means it’s hard to pick out the best games, or the ones that hold out the biggest opportunities – and the list is continually changing as new titles go live and gain popularity. Here are ten titles that have built a following thanks to their addictive gameplay and impressive ambition.

Arguably the biggest and most popular play-to-earn title, Axie Infinity is a Pokemon-like game involving collectible digital creatures called Axies. Each Axie is unique, with characteristics determined by its digital genetic code. The aim of the game is to breed rare Axies that are successful fighters, pitting them against teams of other Axies organized by other players. Players earn SLP and AXS tokens for winning battles.

As NFTs, Axies can be traded on the game’s marketplace, and SLP and AXS can also be exchanged for other cryptos, as well as spent in-game. The rarer and more powerful the Axie, the more it will cost! Players will need three Axies to get started.

Hamsters are typically seen as timid animals, but in this game they fight for honour, glory and wealth in an Augmented Reality (AR) arena that brings an amazing new edge to a tried and tested concept. Successful combat wins Safehamsters tokens, and NFT accessories can be acquired for characters to help them in their quests. These can also be sold for additional revenues if not needed.

One other neat feature within SafeHamsters is the HamsterMill Farms finance and investing facility. This enables users to put their earnings to good use through opportunities in the DeFi sector, using liquidity mining and yield farming to generate extra profits.

In the hit title Gods Unchained, players collect cards for different gods, either by buying them or by winning them through combat with other players or against the computer. While a player might hold a large number of different cards, in each round they choose a number to use and then play from this hand against their opponent. Each player has a life score that falls if they lose a round. If a player manages to reduce their opponent to zero life points, they win and receive new cards as a prize.

Because the gods cards are NFTs, they can be traded for GODS tokens, or on third-party marketplaces, allowing players to make money from ones they no longer want for the game.

The multichain game Alien Worlds is set in a metaverse of seven planets, and has become one of the most popular and active play-to-earn games, with millions of daily transactions. The DAO structure of the game allows players to have a say in how the game economy is run, by staking Trilium tokens to different planets and voting in planetary elections. NFTs earned in the course of the game can be used for different activities including combat, mining, and missions.

This Solana-based game is one of the most ambitious titles in the play-to-earn space. It’s an MMO built with top-of-the-range tech that provides an immersive experience and incredible graphics. The game is set far in the future, in a universe where three different factions (humans, aliens, and intelligent androids) vie for supremacy and control of resources, with the ultimate prize being a fabled planet-sized diamond. It combines space exploration with strategy and role-playing, as gamers fly around the stars and secure revenue streams, forging alliances and engaging in combat where necessary.

Another combat game, CryptoBlades is focused on gaining mythical blades – NFTs that can also be traded – and developing characters who can wield them successfully. Both characters and weapon NFTs can be minted, traded, and developed. The native currency, SKILL tokens, are earned through combat, as well as by going out on raiding missions. SKILL can also be staked to earn passive income.

Another hugely popular title, Splinterlands is a digital card game, set after an event known as the Splintering, with around 300 cards organised around different ‘factions’ or splinters: Fire, Earth, Water, Life, Death, Dragon, or Neutral. Players have different statistics to determine their ability, and there are various forms of gameplay including quests, ranked play, and participating in tournaments. Cards can be converted to different cryptos, including the in-game currency, Dark Energy, which is also used to buy NFTs from the marketplace. It’s even possible to rent cards to other players to increase earnings.

While Illuvium is still in development and release is not expected until 2022, it’s become one of the most keenly-awaited play-to-earn titles, with a huge following in the crypto space. It’s a decentralized RPG revolving around creatures called ‘Illuvials’, set in a detailed and complex world. Players explore the territory, capturing Illuvials, training them and setting them against each other in combat. Rather than having its own in-game currency, Illuvium simply uses ETH. This, combined with the richness of the game’s environment and the possibility of employing many different strategies, has given the game a real buzz.

In this multichain browser-based MMO, players explore a fantasy world, claim territory, and engage in combat with other squads of players, gaining NFTs and other tokens as they gain territory and win control of buildings and artefacts. Tokens can be traded on an in-game marketplace. ThunderLands is currently in development, with launch scheduled for mid-December.

The Crypto Prophecies plays on the crypto world’s love of price predictions and chart analysis. Players take each other on in prediction battles, staking a number of tokens on the next candle in an evolving chart pattern. But it’s not that simple, since they can also use magical items in the form of NFTs to confound their opponents, confusing them by obscuring the charts or disadvantaging them in other ways to give themselves an edge.

Common to all play-to-earn games is the ability to generate real income in the form of NFTs and in-game tokens. This means there’s no longer a cost in terms of time of immersing yourself in a new game and learning how it works, before deciding whether you like it enough to continue. Because players start earning as soon as they begin, they can always sell their NFTs and tokens when they move on, so they haven’t wasted their time. In the best cases, they will become experts in their chosen games and generate substantial income from them.