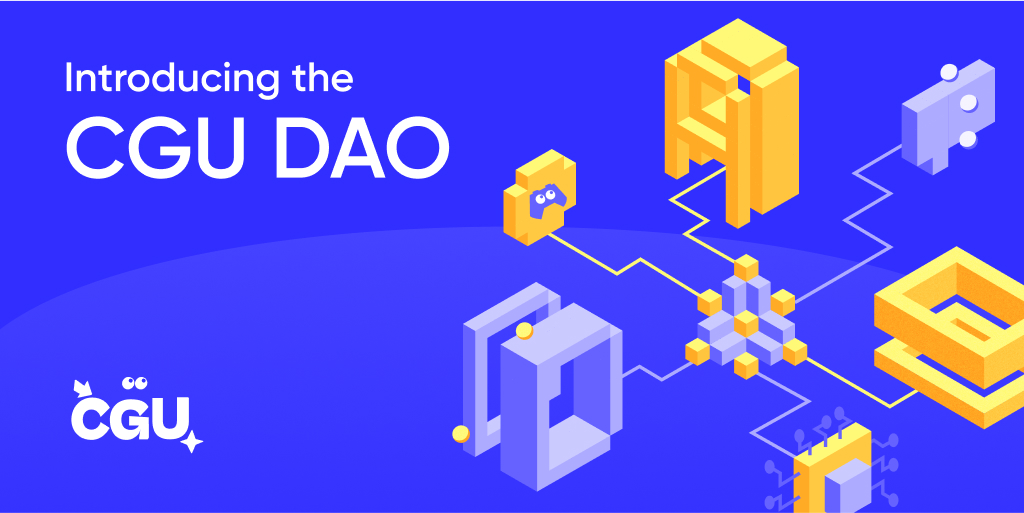 As promised in the CGU white paper released before our public token sale took place in October last year, CGU was always intended to operate as a DAO. In the early days of the project, it was necessary to bootstrap CGU as a centralised initiative, providing the focus and resources to ensure it would grow and achieve critical mass.

We’re pleased to say that it’s now time to move to the next stage on our roadmap, and take the first major steps towards launching the CGU DAO!

What Is A DAO?

The idea of a DAO, or Decentralised Autonomous Organisation, was explored in the original Ethereum white paper. A DAO is a project that is not only built on the blockchain, but that is also run by a global community of token holders.

Most traditional technology companies host their software and databases on centralised servers, which can be shut down or tampered with. Additionally, they are typically managed by a board, or even a single person, who has control over how the business is run.

The aim of a DAO is to remove single points of failure from both the infrastructure and the decision-making process. The community collectively decides how the project should be run by voting on proposals, which are executed trustlessly on the blockchain. In other words, a DAO is a project that is run by its community, for its community.

The CGU DAO has been created using snapshot, a popular way to set up and manage DAOs in the crypto world.

When the CGU DAO is fully up and running, any CGU token holder will be able to create and vote on proposals. However, at this point CGU tokens are still being distributed to users, the CGU community is still growing, and its members are still learning about the DAO. The first iteration of the CGU DAO will therefore take the form of a committee of several major groups of people, who will represent all the different interests across our community, and who will vote on their behalf. The committee includes players and community members,  CGU team members, CGU partners  and investors.

The idea is that we trial this DAO committee for the next six months, at which point the community will have developed and grown further, and a decision can be taken on whether to decentralise decision-making further to all CGU holders.

This approach represents a compromise that allows a good degree of decentralisation, but without handing the entire process to a community that is still very new and growing fast.

Over the next six months, we’ll be encouraging community members to step up and create proposals to shape the future priorities for the CGU DAO, as well as actively discussing proposals that others create, thereby providing the committee with the vital feedback necessary to enable them to represent all CGU members. If this is successful, the next step will be for the Committee to step back, giving greater control to all CGU holders and enabling them to vote directly on proposals.

Watch out for more updates as the CGU community begins to take greater ownership of the project!