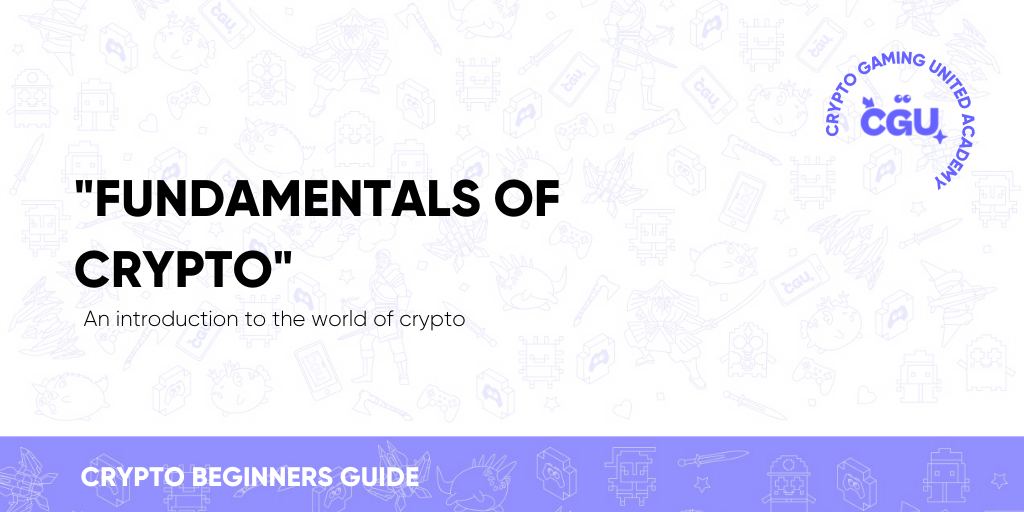 CGU ACADEMY - An introduction into the world of Crypto

Crypto offers amazing benefits over the conventional financial system but can sometimes be confusing for beginners. Here is a one-stop primer to some of the most important topics you’ll need to know and understand when working with blockchain, cryptocurrencies, DeFi, and Web3.

Web3 is the term given to the next generation of the internet: a decentralised, blockchain-driven version of the web.

Web1, also known as the ‘read-only’ web, was characterised by static websites, mostly maintained by individuals and some institutions, hosting their own servers.

Web2, known as the ‘read-write’ web, saw the rise of large corporations like Google and Facebook, and the growth of user-generated content. Web2 onboarded millions of people to online services, but had serious downsides. The companies that run the services have full control over who uses them, and how they are used, as well as having access to user data that they can sell or otherwise employ as they like. Web2 therefore has issues of privacy, censorship, and exploitation.

Web3, or the ‘read-write-own’ web, enables anyone to play a part in running the services everyone uses. Decentralised technologies cut out the middlemen who had the monopoly in Web2, and users are responsible for their own data.

Web3 is powered by blockchain, which allows users to create and transact with tokens of value, and access decentralised financial services that are open to anyone – making the internet more available, more democratic, and fairer.

2. What is a blockchain?

A blockchain is a community-run database: a ledger of transactions that is shared and maintained by thousands of computers around the world. Blockchains are secured by strong cryptography, and are designed to avoid single points of failure and centralisation. There are no middlemen – no big corporations who run the platforms, as there are in Web2.

One of the major applications of blockchains is cryptographic currencies or cryptocurrencies – online cash and digital assets that can be sent and received without any banks or payment processors. As blockchain technology has developed, a whole industry of decentralised finance (DeFi) has arisen, offering a wide range of services to anyone with an internet connection. These services would generally not otherwise be available to most people through the conventional financial system.

Public blockchains are designed to be open, meaning there are no restrictions on who can use them. Anyone can make a transaction on a blockchain, whether that is a simple transfer of money, creating a new asset, or a complex financial transaction like exchanging one currency for another.

Users don’t need to register to create an account. They simply need to generate a new private key, which is a long string of characters that serves as a kind of password to an associated address. The private key is all that is needed to access the address and make transactions from it.

Because there is no central organisation behind the blockchain, and no administrators, security is very important. Anyone who has the private key can move funds from its address. While blockchains are open and accessible to all, then, users have sole responsibility for the safety of their accounts.

Bitcoin was announced in a white paper in October 2008 and launched on 3 January 2009. It was described as ‘a peer to peer electronic cash system’ that avoided central parties like banks, instead relying on a network of ‘miners’ to maintain the shared ledger. Miners are incentivised to act honestly, receiving rewards of new bitcoins and transaction fees paid by users to ensure the accuracy of the blockchain. Because mining requires resources (electricity), dishonest miners not only lose out of the rewards, but also waste money in the attempt. Anyone can mine crypto, but it requires specialist hardware to be done profitably.

Bitcoin was created by Satoshi Nakamoto, a pseudonym for an individual or possibly a group of people. It was first discussed on the Cypherpunks Mailing List, an email list used to communicate ideas about mathematics, cryptography, online security, politics and economics. The Cypherpunks as a movement were concerned about the rise of online surveillance and advocated the use of strong cryptography to maintain financial and personal privacy. Bitcoin arose out of this movement, with the Genesis Block of the Bitcoin blockchain containing a reference to the Global Financial Crisis and an implicit critique of centralised financial services and banking: ‘The Times 03/Jan/2009 Chancellor on brink of second bailout for banks.’

As the first cryptocurrency, Bitcoin has remained the largest, most valuable and most important digital asset, though many other cryptocurrencies and blockchain platforms have been created since. Bitcoin has established a reputation as ‘digital gold’, with individuals, corporations, financial institutions and even nations recognising the advantages of holding an asset that lies outside of the existing financial system, and putting it on their balance sheets.

The launch of Bitcoin marked the beginning of the blockchain industry as a wave of innovation saw new blockchains and new blockchain-based applications developed.

Some of the first of these were so-called alternative crypto coins or ‘altcoins’, which generally altered Bitcoin in relatively small ways to offer certain differences or advantages. Litecoin, for example, was easier to mine and had faster block times.

Later, new blockchains offered completely different functionality. Ethereum, launched in 2015, is a decentralised computer that makes it possible to execute complex software applications based on smart contracts – code that runs on the blockchain. Ethereum became the basis of the DeFi industry, and today hosts a huge ecosystem of decentralised financial projects.

Digital assets, or financial assets based on the blockchain, come in many forms. These are generally distinguished by their use cases. Although they all use the blockchain, different assets may have different regulatory and tax treatments, which also depend on the jurisdiction. Crypto asset types include:

Most regular blockchain tokens have a supply of millions or billions. Every token is interchangeable with every other token of the same kind, and can be divided into tiny sub-units (often 0.00000001 or less).

Non-fungible tokens or NFTs are different. They are unique or limited-edition, indivisible tokens. It’s not possible to own a fraction of one.

These properties make NFTs ideal for representing unusual items, whether digital or physical. For example, while normal fungible tokens might be used to represent cash or shares, an NFT could represent a rare investment like a painting, a classic car, or a digital collectible like an in-game item.

One of NFTs’ most popular use cases to date has been trading digital art, with the NFTs acting as a kind of certificate of ownership. Some of the most valuable pieces of digital art sell for millions of dollars. Projects such as Bored Ape Yacht Club have created whole ecosystems around the artwork, giving holders of the original art greater utility and continuous revenues and value. However, NFTs have utility that goes far beyond this.

NFTs can be used to represent gaming characters and items. Because these exist on the blockchain, they can be transferred and traded, just like other assets. It’s possible for gamers to monetise their playing by developing characters and winning items (as well as fungible tokens), and then selling them for a profit. These are known as play-to-earn (P2E) games. The leading and best-known game of this type is Axie Infinity, in which players battle with fierce creatures known as Axies. As NFTs, Axies can be bought and sold, and the rarer an Axie is, the more a player can earn in the game. Over the course of the pandemic, a growing number of people made a full-time living out of playing games like Axie Infinity.

Some projects have developed NFTs to act as more complex financial assets. For example, an NFT might give a user permission to access certain services, whether in a game or in a DeFi protocol (such as more favourable trading fees, or access to a loan). And NFTs are being used more and more to represent and prove identity online, thereby becoming a vital piece of technology for Web3.

If you want to trade crypto, there are two ways to do it: Spot and Futures markets.

Spot markets are easiest to understand and most accessible for new traders. The Spot price is simply the price you can buy or sell a given crypto (e.g. bitcoin) for at a specific time. If you want to buy bitcoin now and hold it, you’ll buy Spot.

Futures markets are different. With futures, you’re buying a contract, under which you are agreeing to buy or sell bitcoin at a certain point in the future. Unlike the spot market, you are not buying the underlying asset and don’t take delivery of any bitcoins. You can use futures to benefit from falling prices, as well as rising ones, and you can use leverage to increase your profits – though you’ll also increase your losses if the trade goes against you.

Unless you understand crypto markets well, you’ll probably want to trade spot, and custody (store) your own crypto.

When trading, there are two types of exchange you can use: centralised and decentralised.

Centralised exchanges are run by a company that holds your crypto while you trade. You deposit coins to the exchange and place orders to buy or sell for other currencies. Centralised exchanges like Coinbase, Bitstamp and TimeX are popular in the crypto world, because they make it possible to deposit US dollars and other fiat currencies to buy crypto, and because they tend to be fast and easy to use.

Because users give up control of their crypto, there are risks. Billions of dollars of crypto has been lost from centralised exchanges due to hacks, theft, insider trading and mismanagement. (This should not be a problem with regulated exchanges, which have to follow strict rules and identity verification processes.)

Decentralised exchanges (DEXs) have become popular as a solution to the problem of trust. DEXs exist solely on the blockchain, and enable users to trade crypto tokens peer-to-peer, without any middlemen. While some DEXs seek to replicate conventional exchanges, with orderbooks, the most popular are Automated Market Makers (AMMs). These allow users to trade against tokens held in a smart contract, deposited by liquidity providers, with the price set by an algorithm. The user is simply quoted a single price for the amount of crypto they want to buy or sell.

Aside from avoiding the problems of single points of failure, DEXs can be integrated into other DeFi protocols, becoming part of the wider network of decentralised financial services.

Over the past two years, crypto has gained widespread attention, as retail traders, financial institutions, regulators, and even nation states have begun to engage with this new set of technologies and asset class. Some of the key areas to watch over the coming months and years include: